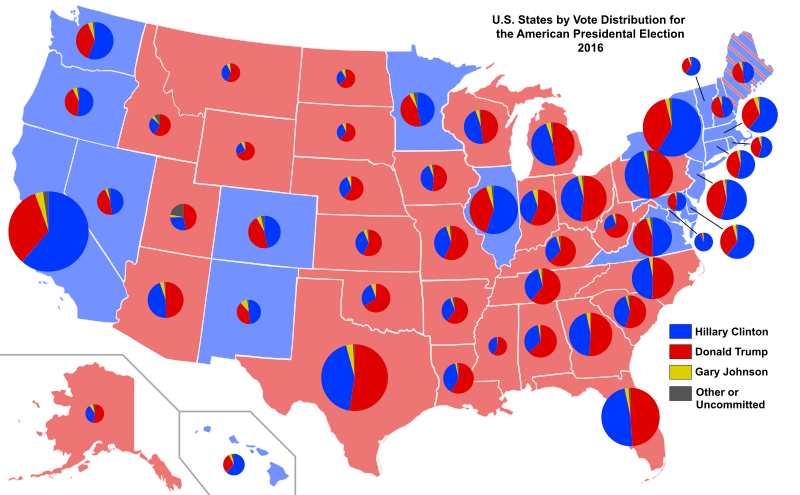 I cried when I found out the results of the 2016 presidential election. I cried hard. I fell asleep the night before quite early, because I was tired of being bombarded with political ads and the disgusting hate that I would see every day on Facebook. I went to bed early believing that I would wake up to Hillary Clinton being our next president. It didn’t happen that way and the several paragraphs that were posted by each person on Facebook proved how much people were truly upset. Most of them were from white people and the word “disappointment” was probably the most common theme of all of them. There were a few posts from people of color and LGBTQA+ who expressed their fear. I didn’t want to get out of bed. I didn’t want to go outside, because I didn’t know what to expect. Would I encounter people yelling in the streets that Trump won and that people like me should go back to “where they came from”? I don’t like Hillary Clinton and she was not who I wanted to be running as the Democratic nominee, but I voted for her because I was thinking of others who would suffer if Trump won. I thought she would win and that we could keep progressing as a society, but now I feel like we might go back; all our hard work to end sexism, racism, and xenophobia will be taken away and forgotten.

It took me a day or two to feel better about what had transpired in this country. I know many Trump supporters and even a few who I have very close relationships with. It’s hard to imagine that they don’t see me, a multiracial woman, as someone who wouldn’t be affected by the Trump administration. I thought of the ways in which women’s health care would change. I thought of my safety when walking out in public. I thought of my dad and brother, their skin darker than mine and if they would be harassed. I know that I am not ready to talk to my partner, because of who he voted for. This impacts me more than some can imagine and yet, I feel that I am safer than some out there because of my ambiguous looks.

I’ve accepted that Trump will be the next president. As comical and disgusting as it is to say those words out loud that Donald Trump, a reality-TV-, beauty-pageant owning-, Twitter-ranting coward will be our next president. My partner made a comment a couple days before the election that all the ads against Trump attack his character. I laughed when he said this, because he had nothing to show except his character. Even when he “attempted” to talk about policy, he had nothing to show but his character.

I remember when I was abroad in Denmark and my Danish friends essentially asked me if I supported Trump and I laughed, because at the time I thought it was all a joke. I told them that most Americans don’t actually support him or believe anything he says. I believed at the time that Bernie Sanders would win the Democratic nominee and we might actually have real change. I remember when Sanders lost to Clinton and how I thought that more people would vote for Trump simply because Clinton was a woman. I still remember thinking that Trump’s whole campaign was a joke and he didn’t actually want the presidency. I believed that up until the night before the election would be called. And now, it’s real.

My mom, a white woman, talked to me the morning after and cried too. She worried for the safety of her black husband and her multiethnic children. She worried for her rights as a woman. I considered giving up. I felt hopelessness. It’s incredible what white privilege can afford somebody; to look away when a person of color is harassed in the streets and told to “go back to Africa”, when you see college students wearing black face with a Confederate flag in the background. I’ve heard countless Trump supporters say that he is not racist, sexist, etc. and that they feel attacked when others associate them with those powerful words. My mom told me to “lay low”, but not to give up on being a good, respectful person to all people. All I can hope for now is that some good will come out of this new administration. All I can hope for is that if and when our rights are taken away, these Trump supporters will be by my side fighting alongside me.